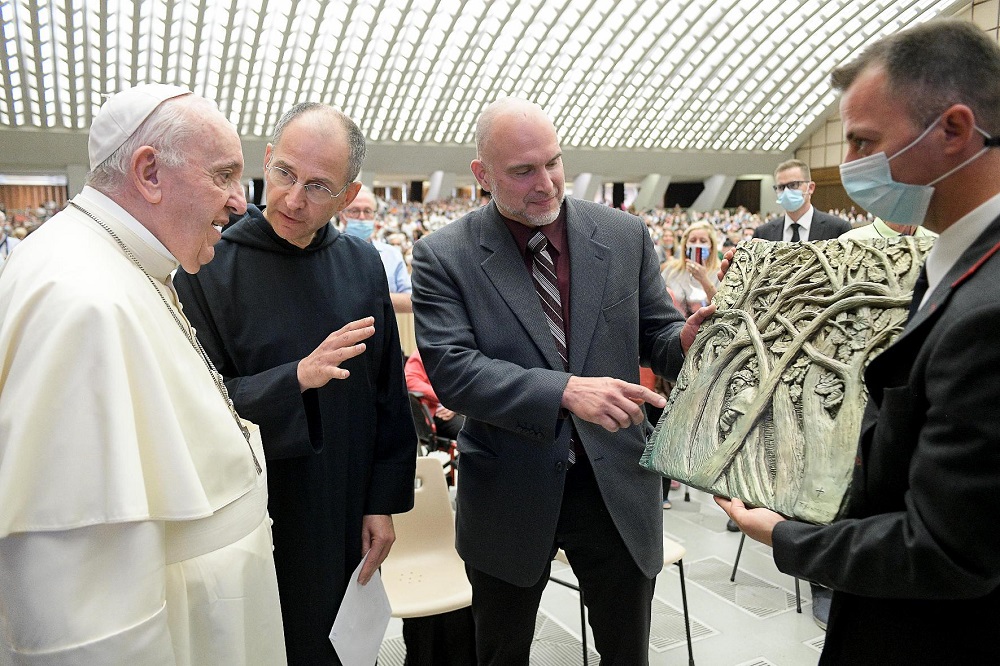 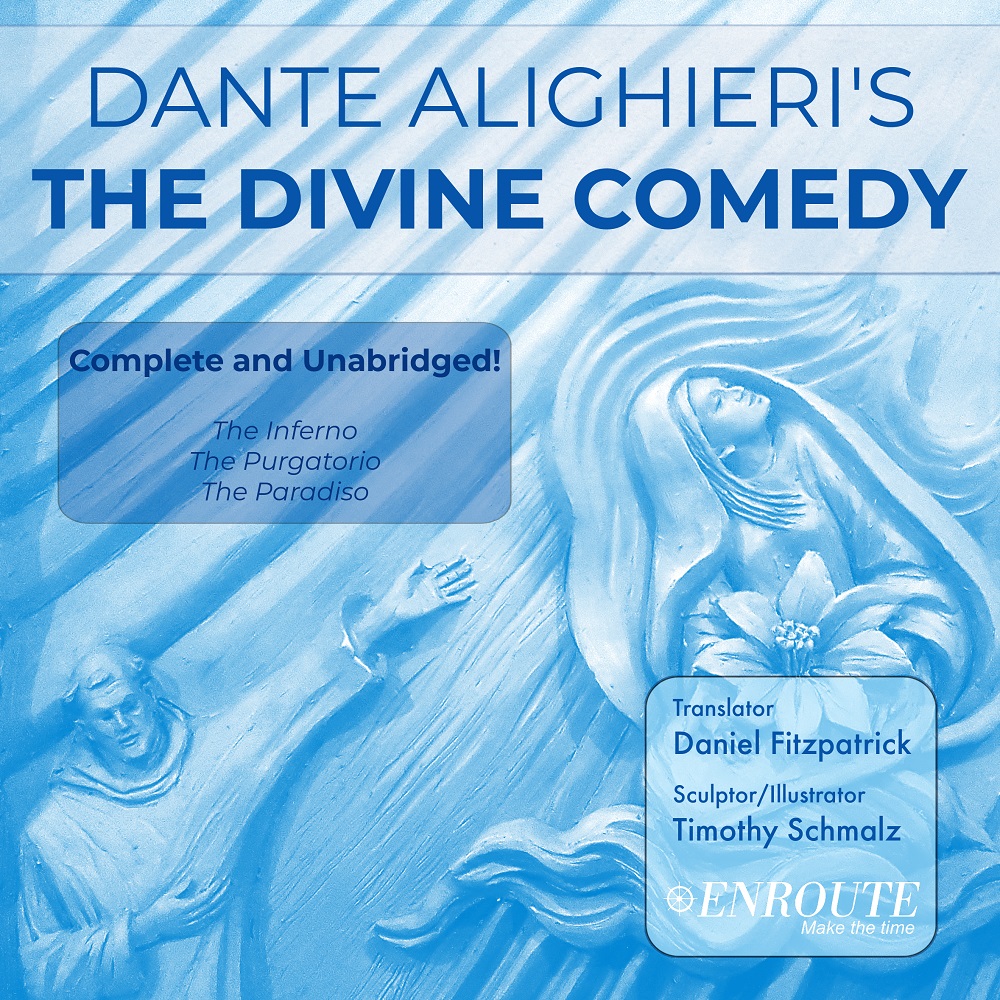 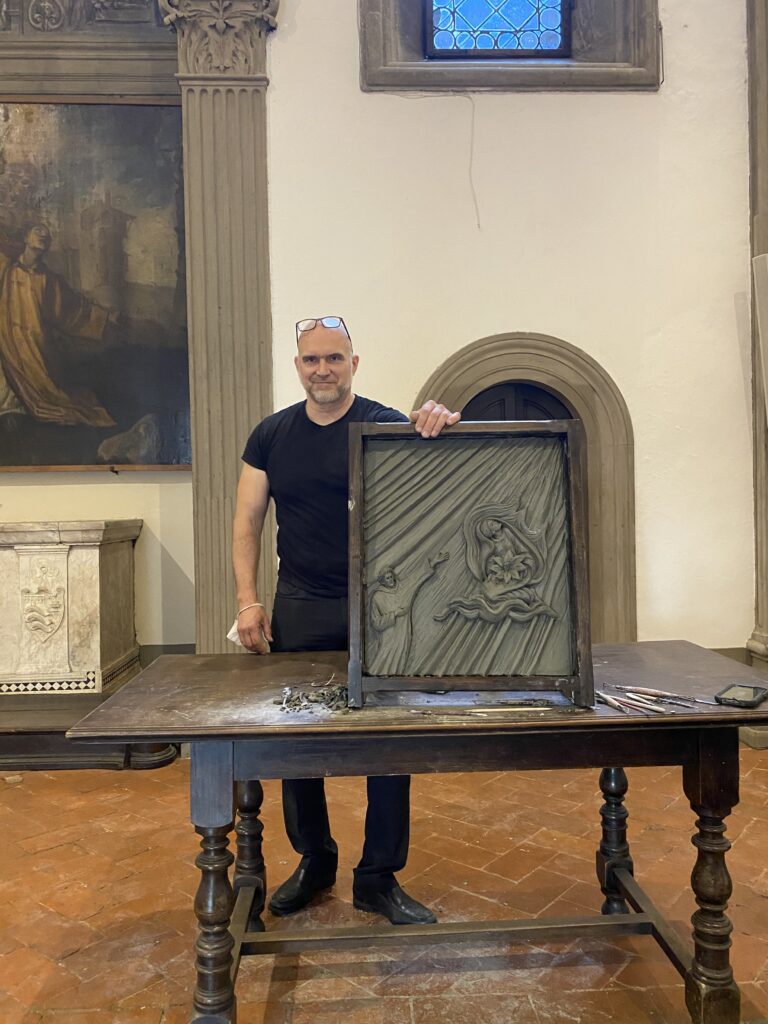 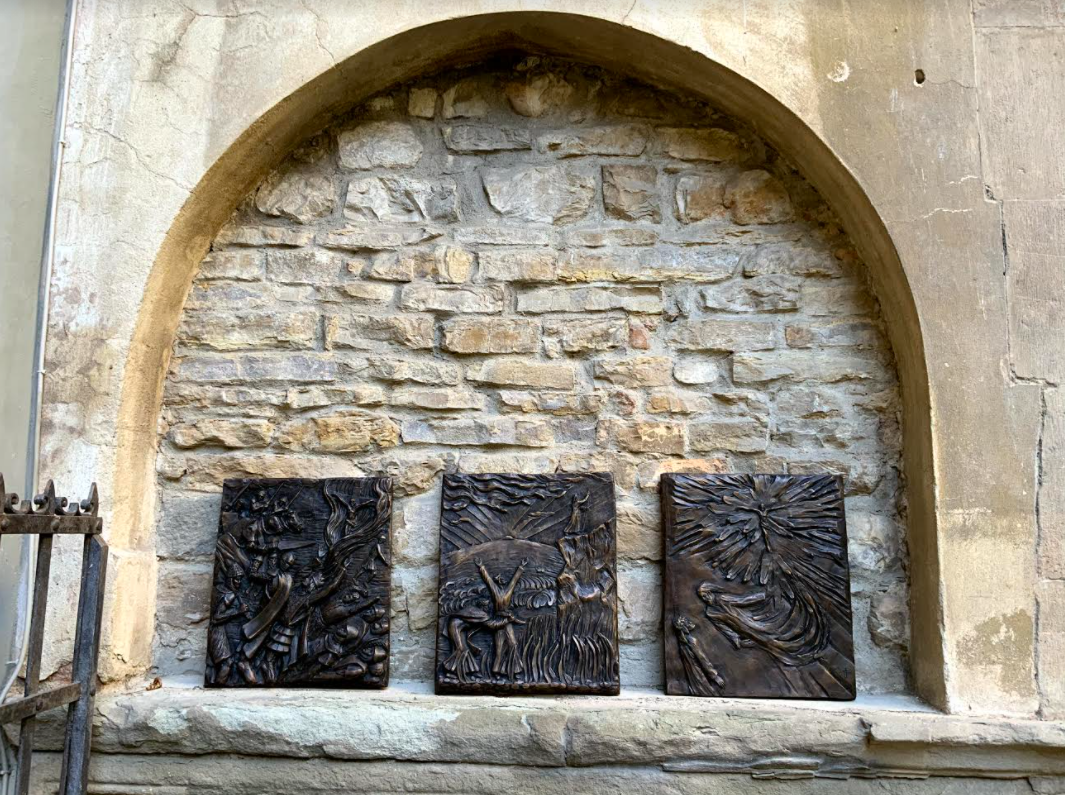 Daniel Fitzpatrick Narrates Dante! Tap this Button to Listen to his Shows!

The Inferno is now available in Paperback and Kindle! Click a link below to order your copy today! And, as you’re ordering, listen to the latest interview between the translator and the sculptor.

Listen to "Episode 97: Cynthia Toolin-Wilson interviews Daniel Fitzpatrick and Timothy Schmalz on the Help Dante Help Italy Project (January 18, 2021)" on Spreaker.
Order the Paperback today! Only $24.95!
Get the Kindle Today! Only $9.99!

The Purgatorio is now available in Paperback and Kindle! Click a link below to order your copy today!

“Fitzpatrick’s is a translation that first and foremost honors Dante through a willingness to be literal. This is Dante’s poem, and so the translator lets the poet speak and signify through English words that match the Italian ones. But that restriction provokes Fitzpatrick to be all the more lyrically resourceful as the verse is lovely and the diction is lucid.” – Dr. Andrew Moran, Professor of English, University of Dallas

“Marvelous–clear and direct in Dante’s way without sacrificing beauty of language.” – Dr. Gregory Roper, Associate Professor of English, Department Chair, and Director of the Shakespeare in Italy program at the University of Dallas

“Brilliant! Fitzpatrick and Schmalz have provided an incredible demonstration of talent in their innovative handling of this timeless masterpiece.” — Dr. Sebastian Mahfood, OP, author of The Narrative Spirituality of Dante’s Divine Comedy

The Paradiso is now available in Paperback and Kindle! Click the link below to order your copy today! 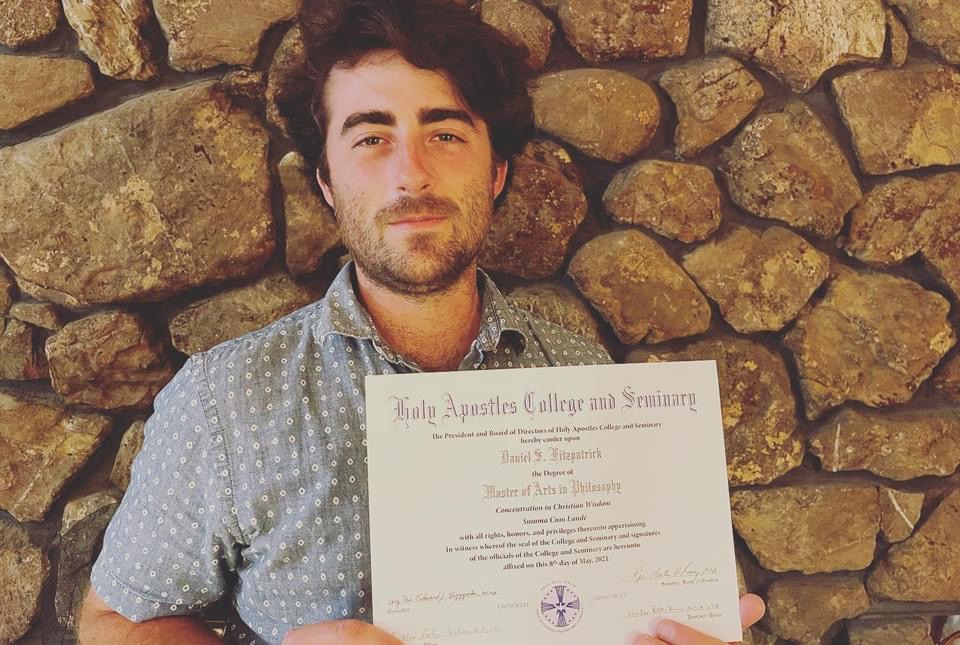 Translator Danny Fitzpatrick graduated with his MA in Philosophy from Holy Apostles College & Seminary on May 8, 2021. 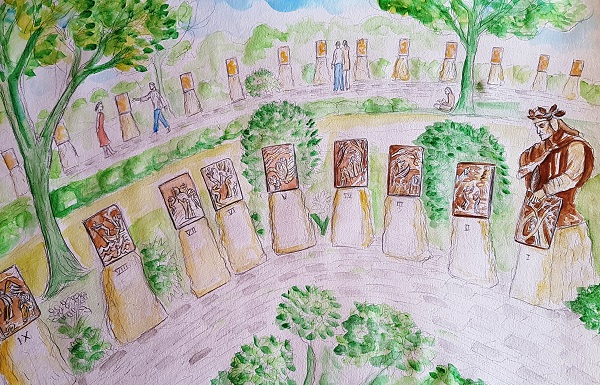 About the Project
(Traduci in italiano)

Dante Alighieri began writing his Comedy, which traces a pilgrim’s progress to our true home in heaven, in the year 1308 and completed the work in the year 1320, publishing the final canticle in 1321, the same year he died. The Comedy begins in a Dark Wood of Despair and ends with the Beatific vision as Dante enters fully into the mind of God.

The translation and artwork will begin to be distributed via email at the pace of two cantos per week (Wednesdays and Sundays) on March 25, 2020, the first Dantedì, a day dedicated by the Italian government to celebrate the accomplishments of the Florentine poet, and will be completed by March 25, 2021, in time for the celebration of the septuacentennial. 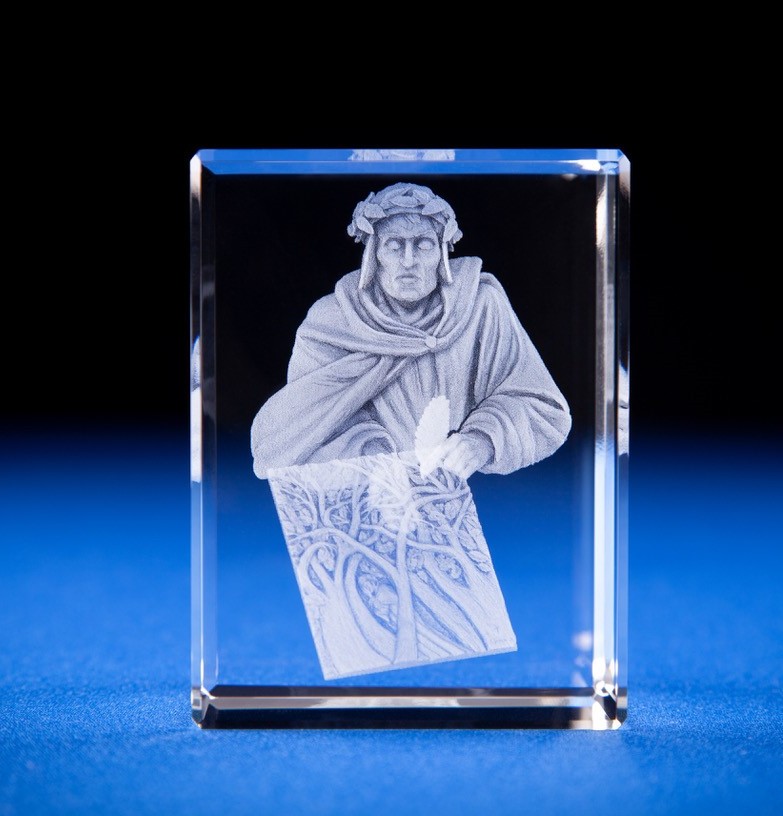 Note: the free copies will be mailed as each is completed over the course of the year. Just send your physical address to Sebastian Mahfood at mahfood@wcatradio.com. 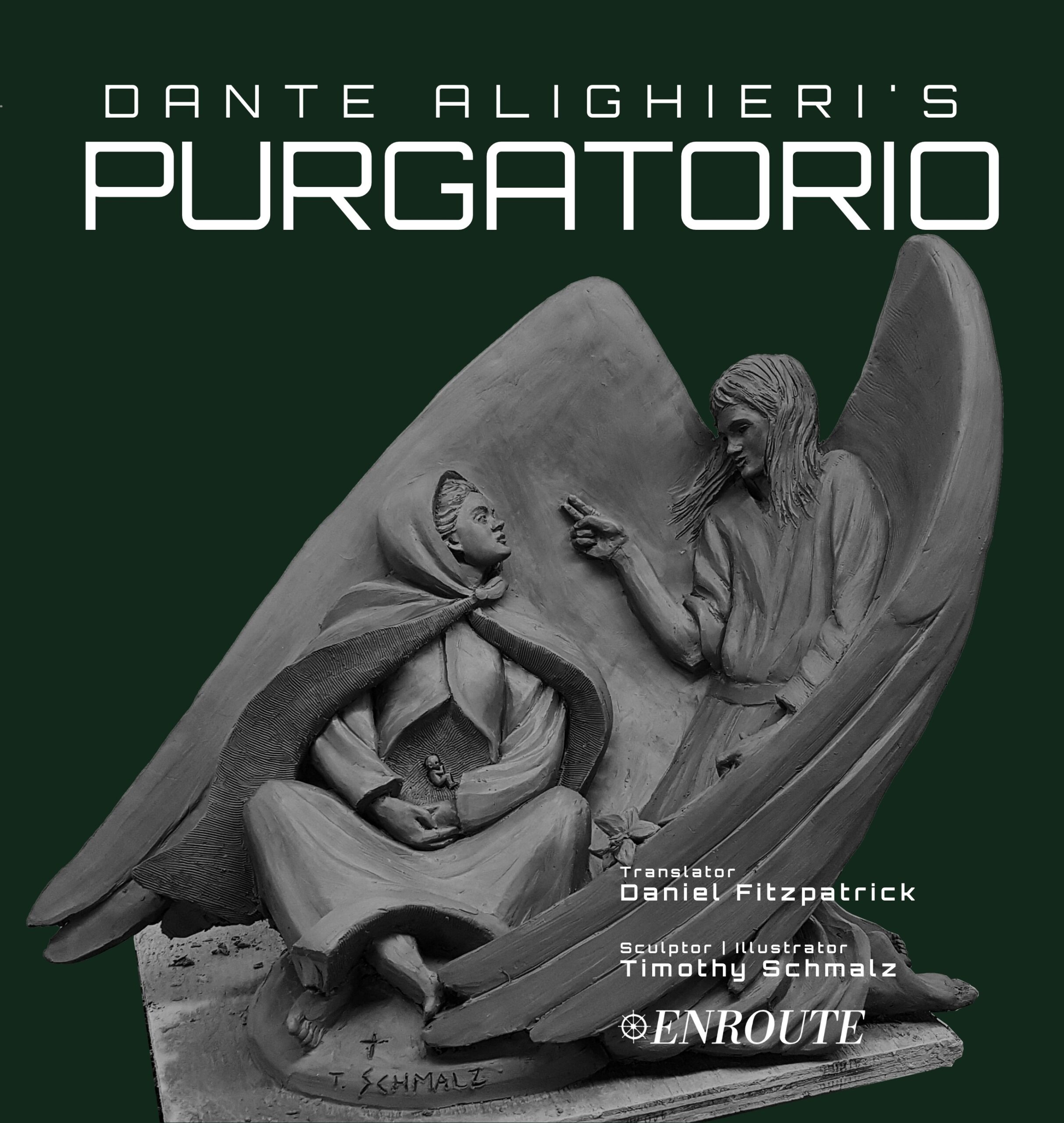 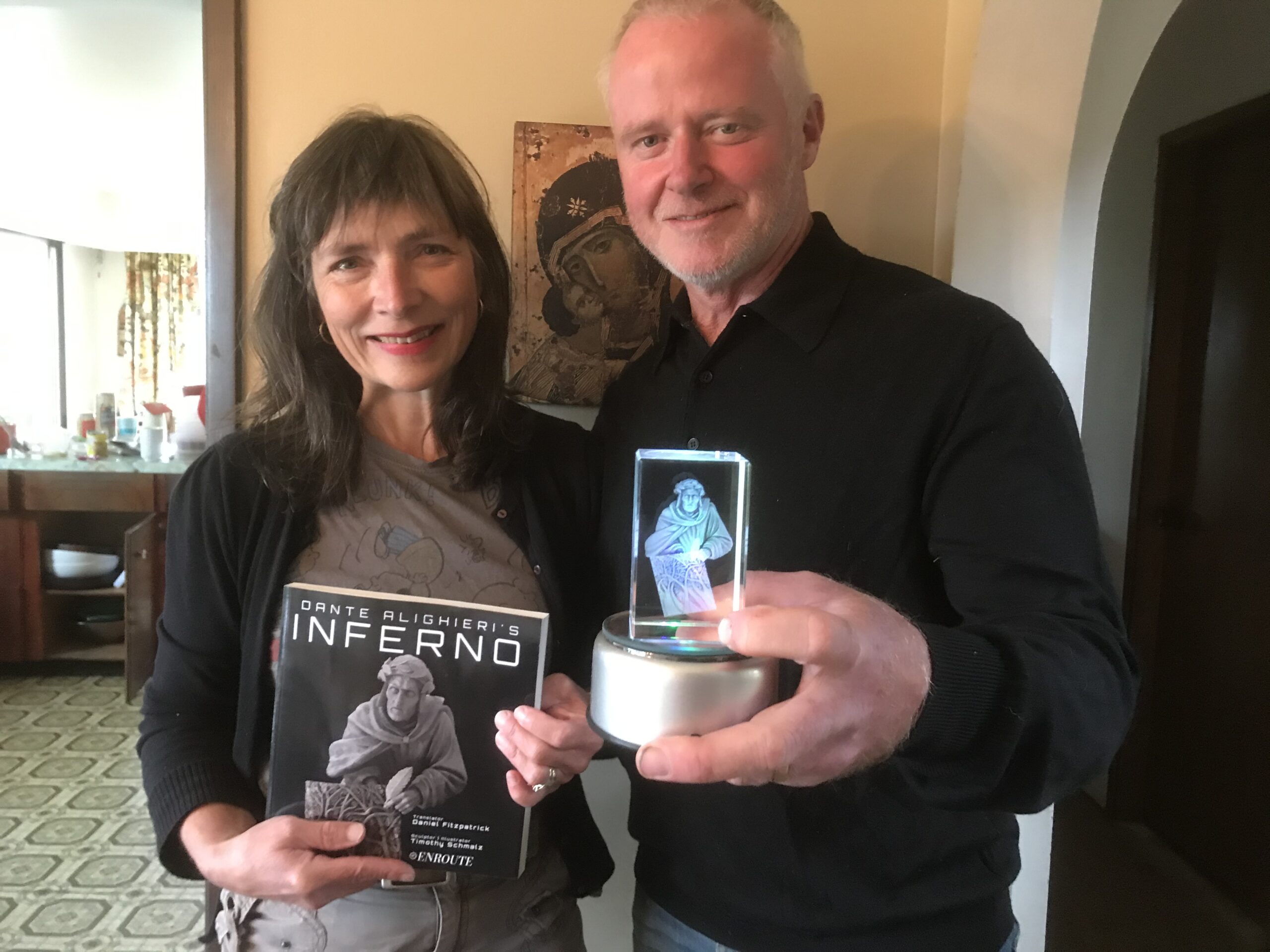 Edward and Melanie McCormick receiving the statue and first printing of Dante Alighieri’s Inferno, translated by Daniel Fitzpatrick and illustrated by Timothy Schmalz 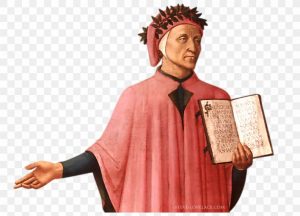 Daniel Fitzpatrick grew up in New Orleans, LA, studied Philosophy at the University of Dallas and Holy Apostles College & Seminary, and lives in Hot Springs, AR, with his wife and two children. His poems and essays have been widely published. His first novel, Only the Lover Sings, was published by En Route Books and Media in 2020.

For over 25 years, Timothy Schmalz has been sculpting large scale sculptures. He is a figurative artist with his pieces installed worldwide. Some of his most reputed pieces are installed in historical churches in Rome and at the Vatican. Timothy describes his most important work as visual translations of the Bible. In this sculpture collection, Timothy provides visual translations of one of the greatest love poems Italy ever produced. Visit Timothy’s website today! https://www.sculpturebytps.com/ 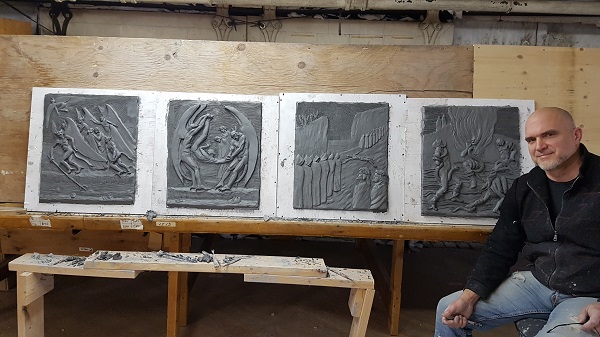 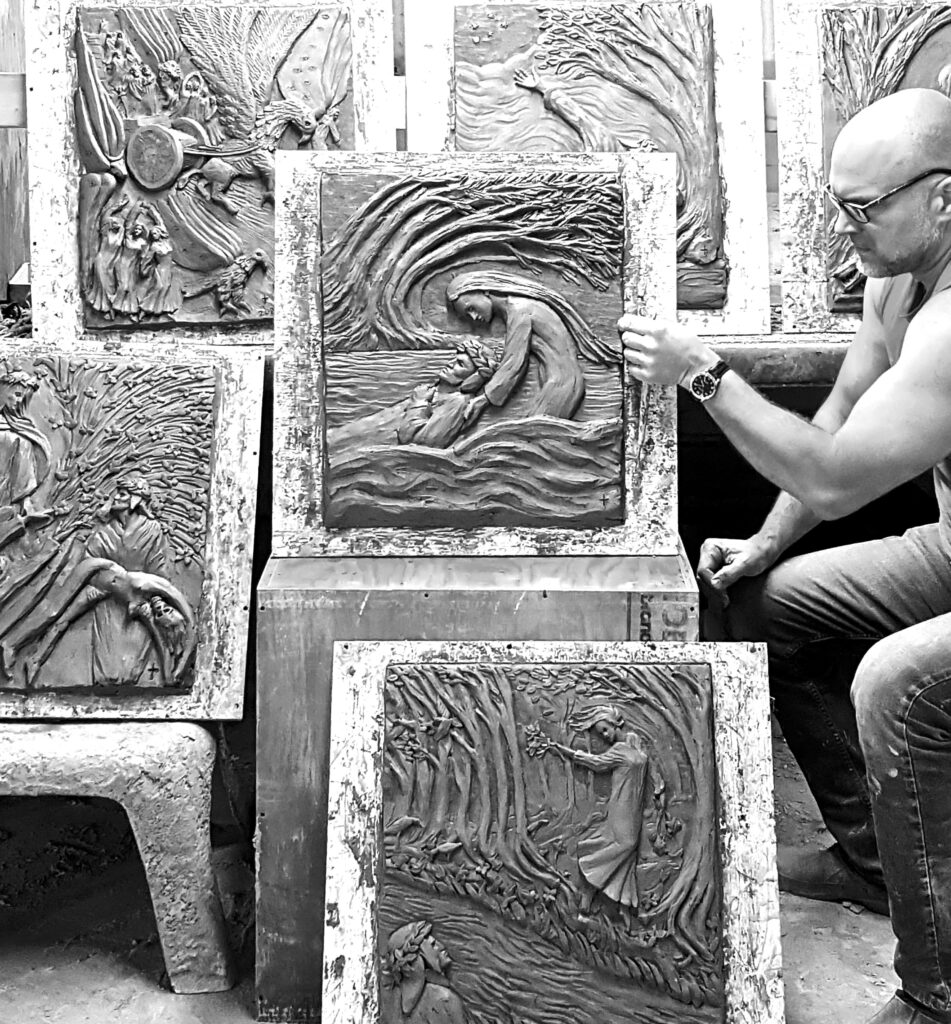 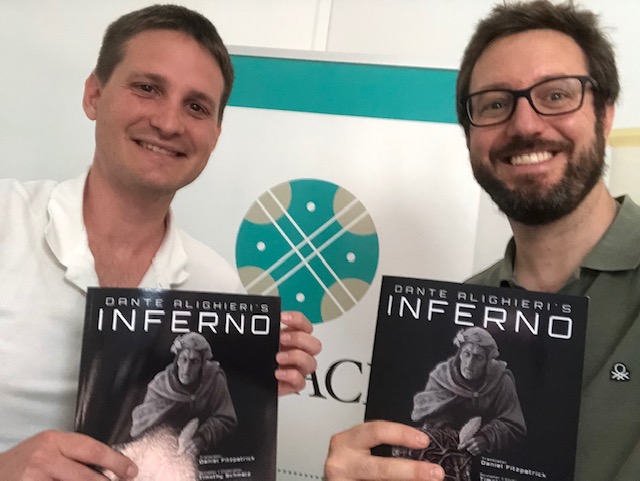 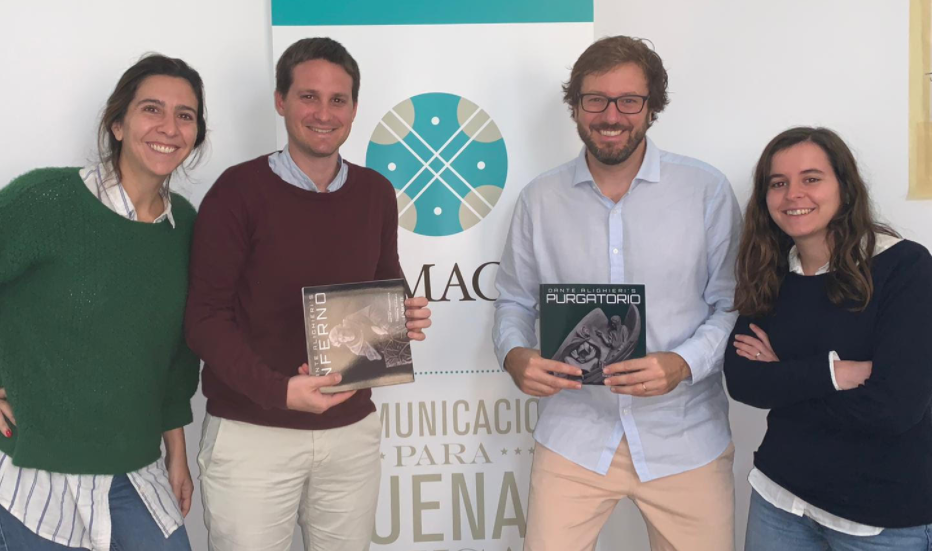 In the midst of the journey of our life
I returned to myself through a shadowy wood,
for the right way was barred.

Ah! How very hard it is to tell
the way of that wood, so savage and harsh and strong
that to dwell in it renews the fear!

Death itself can barely be more bitter.
But to tell you all the good I found,
I will speak of the other things I saw.

How I came to that place I can’t well recount,
filled with sleep as I was at that point
where I forsook the fine way.

But then I found the foot of a hill,
there where that valley that pierced
my heart with fear had failed.

I looked to the height and saw its shoulders
clothed in the early rays of that planet
that takes us straight through every road.

And now the fear that had burned
in the lake of my heart through that night
I’d passed with such distress was quieted a bit.

And as one who, with labored breathing
escapes from the fury of the sea to the shore
and turns to gaze on the perilous water,

so my soul, still fleeing,
turned around to marvel more at the pass
no living person ever left.

Then when I’d composed my weary body a bit,
I took up the way through the desert slope again,
my firm foot always the lower.

And look! Close to the start of the steep
was a leopard, light, so swift,
and covered with a spotted pelt;

and it refused to turn from me
and so much impeded my path
that I was often turned to descend.

It was the time of the morning’s return,
and the sun was climbing with those stars
that were with him when divine love

first moved those beauties;
so that despite that beast in its gaudy pelt
there still was cause to hope

in the time and in the sweet season;
but hardly had the fear left
when the sight of a lion appeared to me.

He seemed to come against me
with his head held high and with rabid hunger;
even the air appeared to tremble.

And a wolf, full of all longing,
who seemed a carcass in her thinness
and makes many live in wretchedness,

this so yoked my soul with the weight
of the fear that rushed up at the sight of her
That I lost the hope of the summit.

And as much as the one who soars in his gains
when the time comes that he must lose them
begins to weep in all his thought,

so did the pacing beast make me,
that, coming against me, little by little
repelled me to where the sun is silent.

While I retreated to the low ground,
there, ahead, a faint figure was shown to my eyes
through the long silence.

When I saw him in that great desert
I cried out to him, “Have mercy on me,
whatever it is you are, whether shade or certain man.”

He replied: “Not a man, though man I was,
and my parents were from Lombardy,
both Mantuans by birth.

I was born beneath Caesar, though it was late,
and I lived in Rome under good Augustus
in the time of the false gods.

I was a poet, and I sang that just
son of Anchises who came from Troy
then when proud Ilium was burned.

But why are you returning to such suffering?
why do you not ascend the delightful mountain,
the source and cause of all joy?”

“Are you then Vergil, that fountain
pouring forth so rich a flow of speech?”
I answered him, my brow clouded with shame.

“O honor and light of other poets,
let the long study and the great love
that made me so search your work avail me.

You are my master and my maker,
you alone are him from whom I took
the lovely style that made my fame.

You see the beast from whom I turned;
protect me from her, famous sage,
from her who makes my blood and pulses falter.”

“For you there is another way to be taken,”
he said on seeing me weeping,
“if you wish to escape this savage place;

since this beast by whom you cry
allows no man to pass her way
but harries him so harshly as to kill him;

and her nature is so wicked and fierce
that her yearning want is never appeased
and after the feast is more famished than before.

many are the beasts by which she mates,
and still there will be more before the hound
should come to make her die hatefully.

This hound won’t eat of lands or riches
but of wisdom, love, and strength,
and his birth will be between felt and felt.

He will be the salvation of lowly Italy
for which the virgin Camilla, Euryalus
and Turnus and Nisus died by iron.

this hound will hunt her in every village,
until he’s returned her to the fire
from which the primal envy loosed her.

Thus for your sake I think you ought
to follow me, and I will be your guide,
and I will lead you from here through an endless place;

there you’ll hear the desperate shrieks,
you’ll see the ancient suffering souls,
crying out in their second death;

and you will see those content
in the flame for hope of coming among the blessed,
whenever that should be.

If then you should wish to rise to those,
you’ll find a worthier soul than I:
I’ll leave you with her in my parting;

for that emperor who reigns on high,
because I was a rebel to his law,
wills not that I should come into his city.

He reigns in every part and there he rules,
there is his city and the high seat;
oh, happy is he elected to be there!”

And I to him: “Poet, I entreat you
by that God you knew not,
that I might flee this evil and worse,

guide me to that city you’ve described,
that I might see St. Peter’s door
and those you call so sorrowful.”
And so he moved on, and I came close behind. 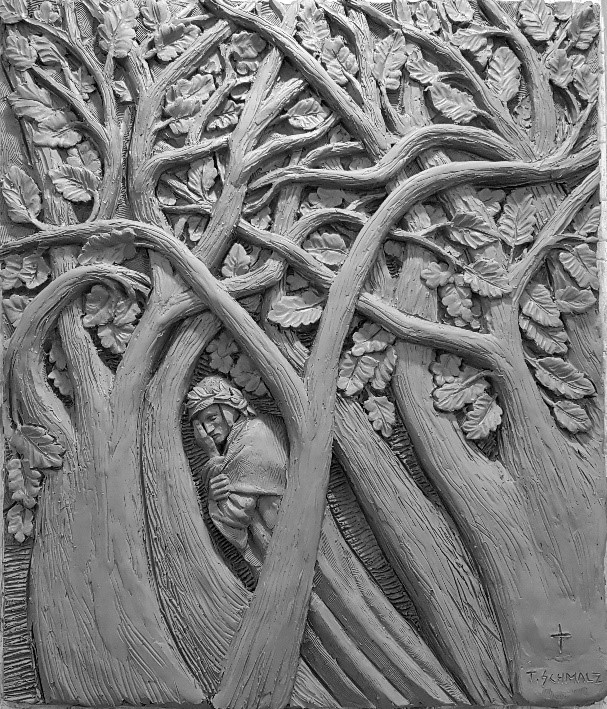 Listen to "WCAT Radio The Open Door (March 27, 2020)" on Spreaker.
Help Dante Help Italy - Click here to give at least $5 Today and Receive a Year of Dante in your Email!
Listen to "Inferno Canto I voiced by Michela Beatrice Ferri" on Spreaker. 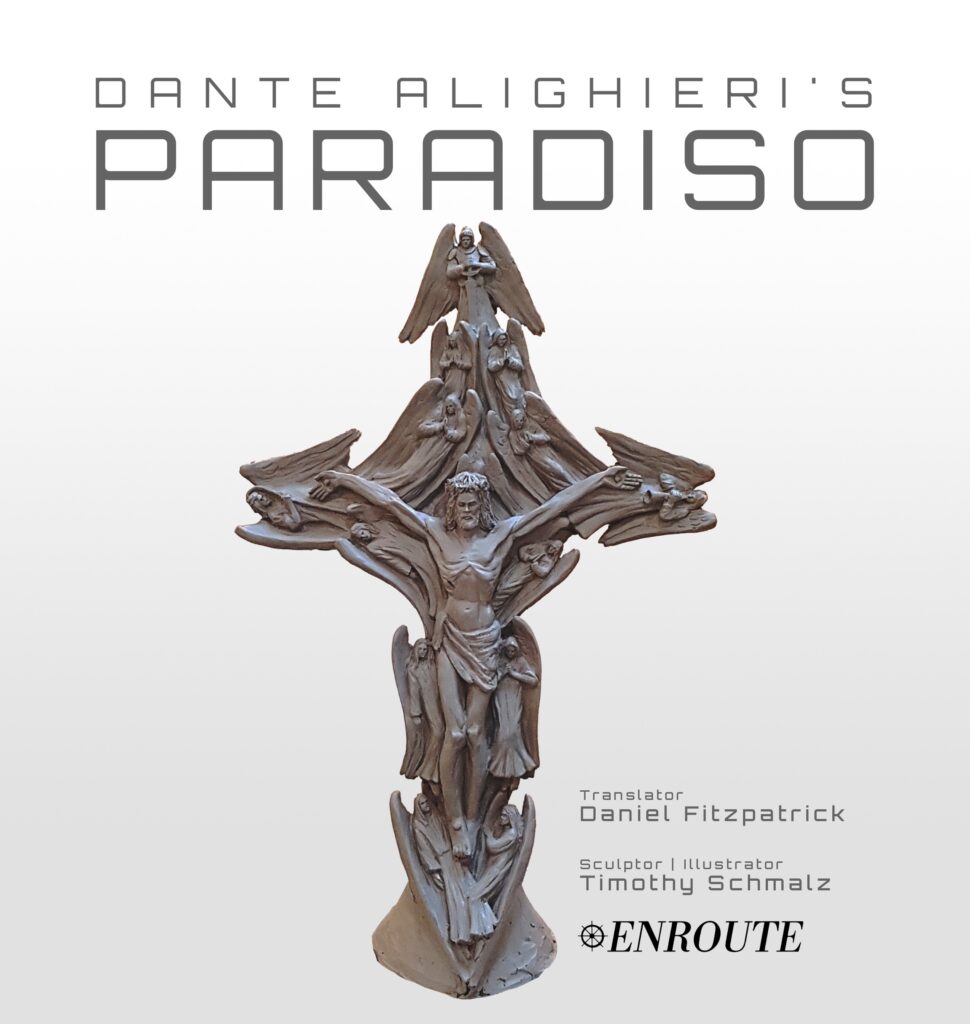 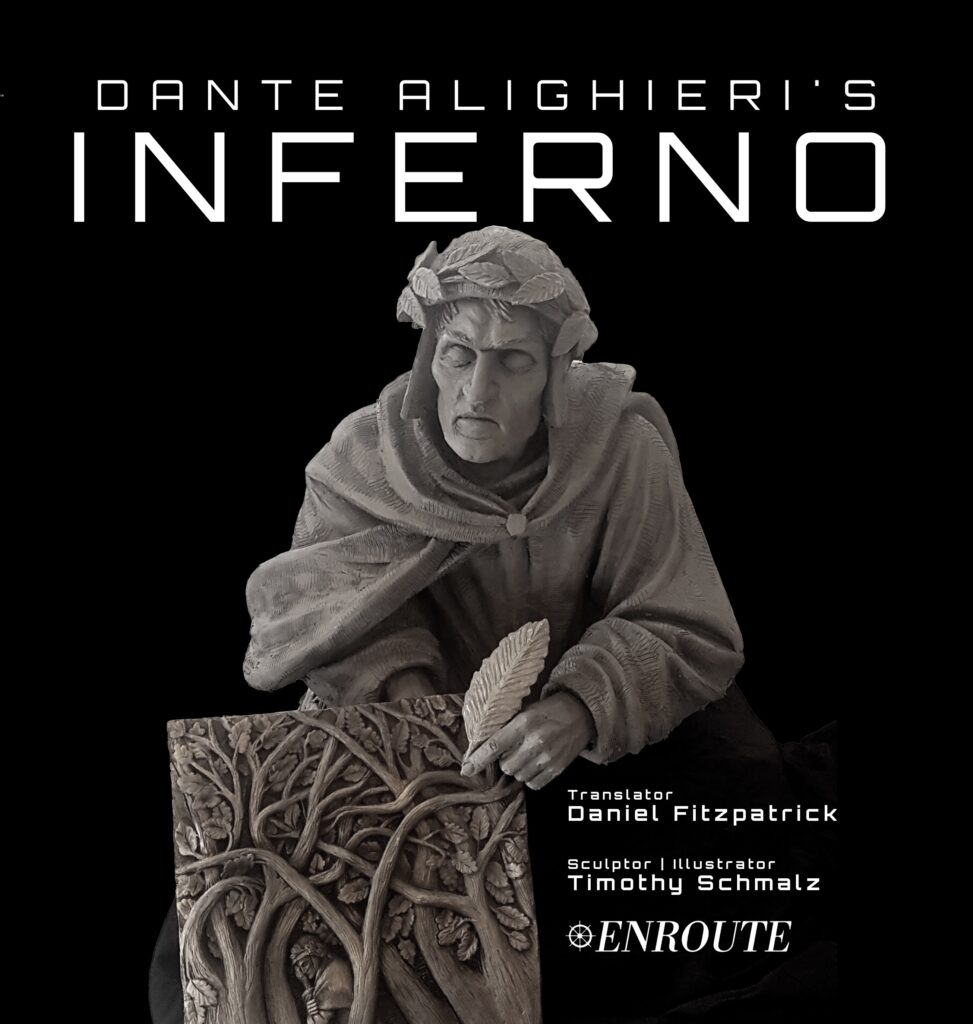