The E-Book! – Catholic Realism: A Framework for the Refutation of Atheism and the Evangelization of Atheists by Dr. Sebastian Mahfood, OP, and Dr. Ronda Chervin 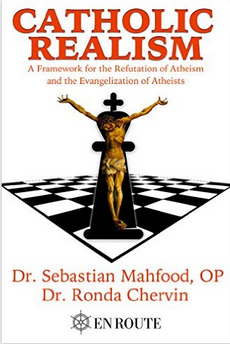 Atheism is in revival. Many in the 21st Century lack a belief in a supernatural Creator. This requires an emboldened response from those who also live by faith, doing what God has called them to do, and not through their five senses alone (2 Corinthians 5:7). As Pope Benedict XVI said in his January 9, 2013, audience, “The event of the Incarnation, of God who became man, like us, shows us the daring realism of divine love.” Those of us who ‘see’ that daring realism are called to share it with others, and that is the idea behind this book called Catholic Realism. As Catholics, we can share a response based on revelation and interpreted by the Magisterium, but that will not satisfy the atheist. Indeed, it does not satisfy many who believe the Gospel message is true but do not live faith-filled lives. For that reason, a philosophical response is a necessary pre-evangelization tool. This book is designed to assist the everyday evangelist in developing such a tool.
About the Authors

Ronda Chervin has a Ph.D. in philosophy from Fordham University and an M.A. in Religious Studies from Notre Dame Apostolic Institute. She is a convert to the Catholic faith from a Jewish but atheistic background. She has been a professor at Loyola Marymount University, St. John’s Seminary of the Los Angeles Archdiocese, Franciscan University of Steubenville, Our Lady of Corpus Christi, and presently teaches at Holy Apostles College and Seminary in Connecticut. More than fifty books of hers have been published by Catholic presses in the area of philosophy and spirituality. Dr. Ronda presents on EWTN and Catholic radio. She is a dedicated widow and grandmother. Her many books include Quotable Saints, Seeking Christ in the Crosses & Joys of Aging, Catholic Realism and Voyage to Insight.

Dr. Sebastian Mahfood, OP, is a Lay Dominican of the Queen of the Holy Rosary chapter in the Province of St. Albert the Great. Dr. Mahfood holds a master’s in comparative literature from the University of Texas at Arlington, a master’s in philosophy and a master’s in theology from Holy Apostles College & Seminary, a master’s in educational technology from Webster University and a doctorate in postcolonial literature and theory from Saint Louis University. Among his other publications include his book Radical Eschatologies: Embracing the Eschaton in the Works of Ngugi wa Thiong’o, Nuruddin Farah, and Ayi Kwei Armah. He lives in St. Louis with his wife, Dr. Stephanie Mahfood, and children, Alexander and Eva Ruth.

I’ve read dozens of books both promoting and refuting atheism, and Drs. Mahfood and Chervin have produced one of my absolute favorites. Not only does this book reveal the weakness of classical and modern atheistic arguments, it shows the truth, goodness, and beauty of Catholic realism, from a masterful summary of Aquinas’s proofs of God’s existence and descriptions of His attributes, to sprinklings of the wisdom and artistry of Dante. Catholic Realism features penetrating biographical sketches of prominent modern atheists turned theists (some of whom were completely new to me), probing philosophical analyses of metaphysical and ethical issues, and an excellent chapter on the enduring friendship between the Catholic Faith and science. Catholic Realism is superb and deserves a very wide audience. – Dr. Kevin Vost, author of Memorize the Mass!, Memorize the Faith! and Memorize the Reasons!